Born in Chiba, Japan, Mina Osako developed her interest in music at age 2.  She attended Yamaha Music School and participated in music festivals as a member of Electone Ensemble. After moving to U.S., she earned her Bachelor of Music in piano performance at University of Hawai'i and Master of Music at SUNY
Purchase where she was a recipient of vocal accompanist fellowship.  While at school, she participated in a number of masterclass where she worked with Wu Han, Frank Hanegan, Ian Parker, and Sara Davis Buechner.

Mina is an active vocal collaborator and chamber musician and has performed at various concerts, musical productions and school and church choirs in Japan and the U.S.  As a music educator, she has taught piano and music theory in New York and Connecticut, and she is currently a faculty member at Yamaha Music School in Boston.  Her mentors include Thomas Rosenkranz, Jonathan Korth and Paul Ostrovsky. 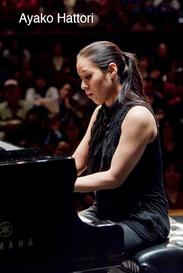 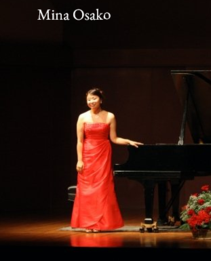 Ayako Hattori has taught both privately and in the classroom at Boston University, the University of Michigan, the Manhattan School of Music, and the University of Redlands, as well as maintaining private studios in Ann Arbor, New York City, and Orange County, California. In 2008, she spoke at the MTNA National Convention in Denver Colorado, lecturing on the use of extended techniques in pedagogical practice through the music of Henry Cowell. She has performed in California, New York City, Ann Arbor, and made a special appearance at the 2008 Midwest Composers' Symposium in the world premiere of Paul Dooley's "Dani's Dance."

Ayako began her musical studies at the age of 4 at the Yamaha Music School in Orange County, studying both piano and composition. While a student at Yamaha, she received both first and second prizes in the Music Teachers' Association of California Composition Contest. She received her Bachelors' Degree at the Manhattan School of Music, where she studied with Phillip Kawin. She received her Masters' Degree in Pedagogy and Performance at the University of Michigan as a full-tuition scholarship student of Louis Nagel (piano) and John Ellis (pedagogy). She currently attends Boston University, where she is pursuing her Doctorate of Musical Arts degree as a scholarship student.

Ayako teaches on Thursdays and Fridays at Bay State Piano.

The continuing success of the Piano Lesson program and its growth through referrals and reputation has increased the number of piano teachers who are now giving lessons at the store. I have four piano teachers giving lessons during the week Monday through Friday. The feedback from parents and students about the teachers has been fantastic. These are all very dedicated, motivated and inspiring teachers, who are able to challenge their students musically to reach their potential. Their calm and caring attention to the progress of each student is especially reassuring and meaningful. With a daily commitment invested in piano practice, the students under this expert instruction can make huge musical strides.

Please, when you have a moment, check the impressive resumes and bios of these talented performers and teachers. I leave all the scheduling of lessons to the teachers. Some of the teaching schedules are filled, so please contact me and I can put you in touch with a teacher who has an opening.